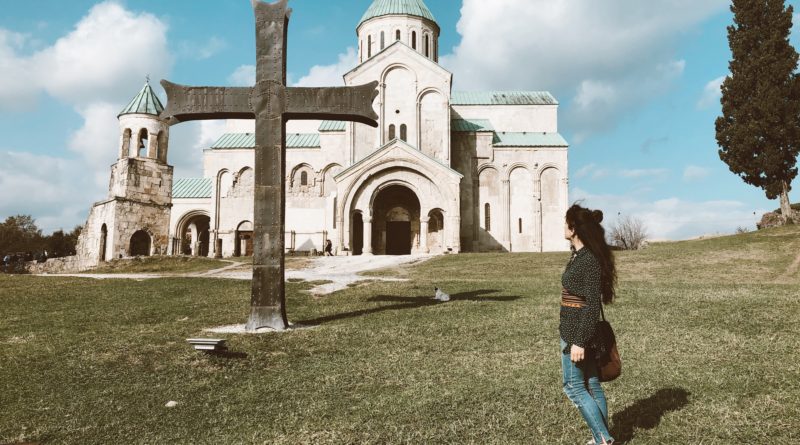 A little and useful guide to Kutaisi, the second biggest city in Georgia. Yet, what is there to see and do (without leaving town)?

I have to admit that before leaving I looked online for more information but there was almost none. No Guide to Kutaisi, many tips offered by international blogs and travel magazines mostly concerned things to do and see outside Kutaisi, in the mountain and hill areas of the Imereti countryside.

In this guide to Kutaisi, I’m gonna talk about the really interesting tours and excursions I’ve personally taken and tried for you, I promise, but not today.
In this article, I answer the questions that I had/I kept asking myself/I wondered about myself before leaving, and I’m going to refer only to the city of Kutaisi and to what you can do and see here.

Visible from almost every corner of the city centre, the Bagrati Cathedral is considered a masterpiece of medieval architecture (“chronicon 223” reads the inscription, or else the year 1003 in our calendar).

To reach this giant building boasting cerulean-tipped domes on the top of Uk’imerioni hill, you need to walk a little uphill along the side roads of the Rioni river.

The view of the river and over the roofs of the city is simply wonderful and, during sunny days, the light is stunning all day long.

Bagrati Cathedral… from Our Garden Café

Once out of the Cathedral and before going downhill, I suggest you stop at “Our Garden” risto-pub for a taste of Khachapuri (Imereti version, the most traditional one yet different from what you get in Tblisi), that will basically be baked in front of you. In the soon-coming gourmet guide to Kutaisi, I will give you more detailed information about Georgian food and where to find it.
Yet, since I’ve brought you on the top of Uk’imerioni hill, once going downhill I suggest you pay a visit to the…

Here’s one of the things that, in a few years, is bound to change, improve and attract more tourists, in a good way, while becoming less genuine, so I definitely have to add it in my guide to Kutaisi.

At the moment, along the roads of the residential area that lead to the cathedral, you will find several signs reading “Wine Cellar” (both in English and Georgian).
One of the most interesting things to do in Kutaisi is actually booking your visit to a private wine cellar including wine tasting.

These cellars are extremely close if not next to the houses of their owners, who produce wine based on the Georgian method that is different from the rest of Europe. They will show you how wine is made and offer you a tasting of typical home-made products prepared by grandparents, wives and husbands.

It goes without saying that these are not places where you can have a drink or eat whenever you like as if you were in a pub, because they are not pubs. I’m talking about private cellars so you need to book in advance.
You can do it yourself or ask the owners of the place where you’re staying.
There’s quite a number of them spread all over the city of Kutaisi. I’ve tried Mate’s Wine Cellar and I highly recommend it because there’s also a nice family story behind it.
Among the best cellars, don’t miss Toma’s Wine Cellar and Lechkhumian Wine Cellar.

I’m not done with a place if I haven’t been to the market, you all know that!
I think that a market, I mean a real one where people go shopping every day, can tell us a lot about a place and as a place teller for a living I personally can’t do without this concentration of culture.

The Kutaisi market, also known as Green Bazar, extends under a number of porticos but we can take the “entrance” is on Shota Rustaveli Ave as the main one.
This daily network of meetings swarms with fruit and vegetables products and the colourful stalls selling ever present typical sweets like Churchkhela, that look like candles but are actually dried fruit covered in glazed fruit juice, spices and cheese.
You’ll mostly see old people standing in the back of the stalls and quite often they are not the simply the dealers but the producers.

Besides the Kutaisi market, you’ll find plenty of little self-managed markets all around the city, in the parks or under porticos, that sell old relics, antiques, wooden products or boiled wool goods. It’s mainly street markets that sell objects coming from emptied cellars and attics and, why hide it, set up by that significant portion of citizens, mainly old people, who live by their wits.
Georgia is among the 5 poorest nations of the old continent and it owes a lot to the remittances of the many workers and caregivers who emigrated to the West leaving their parents, husbands and kids behind. In general, the average income of a caregiver paid off the books in Italy is enough to support entire families, including spouse, kids, grandparents and parents-in-law.
This is not actually meant to be a geopolitics lesson but mainly an advice to observe everything and make a detailed assessment of situations that might elsewhere be defined as “shabby” or bad.

A place that we can definitely refer to as “marvellous” is instead the Kutaisi Botanic Garden, and you can get there on foot by walking along the left side of the river.
Besides how beautiful it is to see school kids listen to botanic lessons, look for leaves, scream and get excited when they find pebbles with magical shapes (a true story), I found out that this park has wheelchair accessible paths and I think it is among the nicest green areas in Europe.

The garden paths are marked with bamboo handrails and also benches and swings are made of the same material.
What’s more, there are many different plant species and humongous century-old oaks, whose holiness is celebrated in various ways, from small marquees and benches that surround them like altars in a temple, to turning the oaks themselves into places of worship. I’m not joking, there’s a “temple oak” you can go in, with a bell and corners for votive candles in front.

A place where telling about the holiness of the trees and nature is not just rhetoric but it’s the truth, and what I appreciate the most is that this how this narration is passed on to both adults and children.

The wonderful Kutaisi Botanical Garden is not the only green area worth mentioning. There are different green areas scattered across town, including the small park that leads to the Colchis Fountain, which is one of the first results you get when searching the web for pictures of Kutaisi.

As I already said a few years ago, give up your aesthetic judgement based on renaissance parameters when you look at the buildings of other residential areas and with different stories to tell.

And this fountain, the Colchis Fountain, whose allegoric explanation is nowhere to be found including on Wikipedia, tells of when Kutaisi was the capital of the old Colchis reign, which contained the tribes that laid the foundations of Georgian culture. It tells about and celebrates that part of culture that is still unspoilt after different rules, from the Ottomans to Tsarist Russia and then the Soviets.

Another weird place, with a weird shape and history.
Kutaisi is seat to the Georgian Parliament, whereas the other administration offices of the government are located in Tblisi.
The building has been designed by Spanish architects in post-modern architecture, with glass vaults and roofs and extremely bright interiors.
It sure isn’t easy for the members of parliament to get here from Tblisi as it takes three hours and a half drive, often on winding roads, across mountains and hills.
Many MPs end up travelling here even by plane, thus contributing to sparking controversy about a choice that is considered by many as a waste of money in a country that simply can’t afford it, especially now that it’s trying to join the EU despite all budgetary problems.

Controversy is not just about economic but also ethical concerns, since the parliament is located in a quite run-down suburban area, that has been poorly maintained by the past administrations. What’s more, the site used to host a memorial dedicated to the over 300.000 Georgians who died during World War II.

The point is that even Russian soldiers were buried and commemorated here, so probably the choice to get rid of the memorial is based on the desire to cut all connections with the Soviet past.
Tours last a little over one hour and are available every Wednesday, Thursday and Friday at 12am, 3pm, 5pm.
You can book by e-mail at toursparliament@gmail.com – prdepartment@parliament.ge

Kutaisi is not like Tblisi, which is way more similar to a big city at least in terms of architecture and “frenzy”.
Even though it is the second biggest city in Georgia with a history of great industrial expansion suddenly interrupted by the historical events of the last century, Kutaisi shares some of the typical features of a nation with the lowest income per capita in the old continent.

As an expert traveller of cities that have totally changed over the past few years (see Sofia and Tirana), my analysis is that the same applies to Kutaisi that will surely be different from what we see today in 365 days time.

A tour along the side streets allows visitors to see and take pictures of urban views and spots that will probably be disappeared in 5 years from now. This views tell the story of a place that was once downtown but then became uptown and  is now trying to recover, with patience and hard work.

Ooops, my travelmate is a Veg… 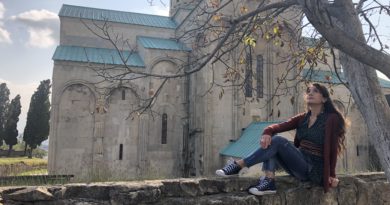 3 pensieri riguardo “Guide to Kutaisi, Georgia: What to do and see.”